Precious Treasures International School is located on Cooper Jack Bay Road, Providenciales, in the Turks and Caicos Islands. It provides highly successful education to a truly international family of children from Pre-Kindergarten to Grade 9. Developed by School Directors, Mr. Allan Hutchinson and Mrs. Yvonne Hutchinson 30 years ago;  PTIS today communicates a clear vision for its future growth and continued commitment to good quality education at an affordable rate. 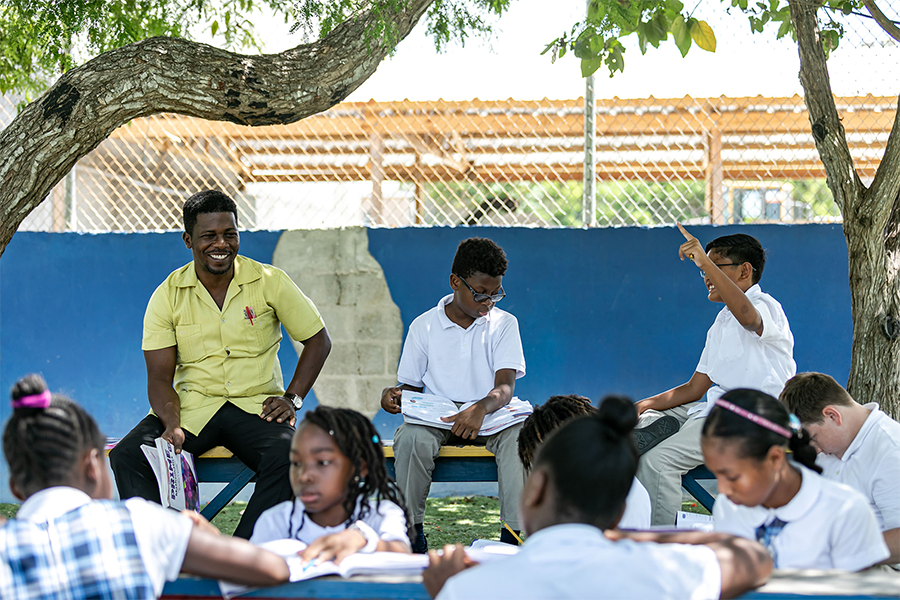 As the first professionally operated Daycare and Preschool in Providenciales, Precious Treasures School opened its door to students in February 1989. During this period it catered to children between the ages of 6 weeks and 5 years old.  The enrollment grew rapidly and within the first few months, the first member of staff, Mrs. Florence Ewing, was employed. Miss Florence, as she is affectionately called, Faithfully served until 2018.
In 1991, approximately 1.5 acres of land was purchased and the Directors started to develop the first custom-designed Daycare and Pre-school facility in the Turks and Caicos Islands. A 5,400 sq. ft. custom–designed facility was constructed. In 1995, Precious Treasures moved into its own facility, which was officially declared opened in 1996. Since then, another 7,000 square feet of building has been added, to include 4 additional classrooms and a multipurpose auditorium.
Due to the rapid population growth in the islands and the academic performance of our (5) year old graduates, we were encouraged by parents to extend our Primary Education provision, one Grade level per academic year. In 1996, the decision was made to discontinue the Day Care service. The discontinuation of the service facilitated greater focus on the developmental the primary school. In 2000, we celebrated our first primary school graduation. From this time, Precious Treasures School has consistently achieved and maintained high academic standards, attaining 100% passes in internal and National Assessments, including the Grade Six Achievement test (GSAT).

Precious Treasures International School continues to hold high reputation within the TCI community, has earned high appraisals from past and present Ministers of Education and the Department of Education and continues along its path to strive for excellence in education.
Since its inception, Precious Treasures International School has impacted the lives of many students in a positive way. This is evident in the achievements and demeanor of past graduates of this institution who are studying at home and abroad, and those who have successfully completed their tertiary education and returned home to make a positive contribution to our society. We also receive reports from several expatriates who have returned home and have faithfully kept us abreast of the progress and successes of their child/children.
Its reputation locally ranks amongst the very top performers within the Primary School category and our pupils continue to excel at entrance examinations for the High Schools of choice. To complement this standard, pupil levels of success at the Grade Six Achievement Test (GSAT), enable our pupils to have premium choice for secondary school education. From 2008, PTIS has consistently had students place in the top ten ranking based on the GSAT. In fact, from 2009 to 2017 the number 1 student has been from PTIS.
X
×
You must be logged in before using WishList. To login click here